So 4 weeks ago we took Elliott to see the fantastic David Kilmurry for some cognitive behavioural hypnotherapy to hopefully cure his Selective Eating Disorder. It was a decision that took me months to make after certain health professionals advised me that it would be the worst thing I could do for him because of his autism. I’m not having a go at them, I was angry but now just realise it was ignorance/lack of knowledge on their part. I do hope that changes one day. I’m very pleased to say that the tears, worries and guilt of possibly being an awful mum was all worth it as Elliott has totally kicked SED into touch! We are witnessing things that I only dreamed/prayed would happen one day. When I first spoke to David on the phone I knew I’d made the right desicion and my only regret now is that we’d not visited him sooner. I can never put into words how grateful we are. I came across this yesterday – Elliott’s Camhs appointment card to try and overcome his selective eating disorder. Brought back some not very nice memories that I hope nobody else has to go through! I remember my stress levels being so high and Elliott was not in a great place! What a difference now though thanks to that 2 hour appointment with the fantastic David Kilmurry. 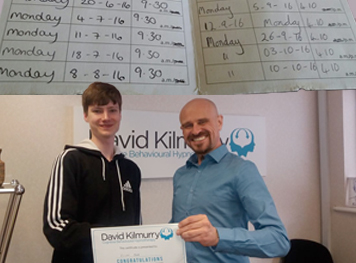